You can find on this page the Russia geographical map to print and to download in PDF. The Russia geographic map presents the topography, elevation, rivers, mountains, climate and physical features of Russia in Europe.
There are 23 UNESCO World Heritage Sites in Russia, 40 UNESCO biosphere reserves, 40 national parks and 101 nature reserves. It lies between latitudes 41° and 82° N, and longitudes 19° E and 169° W as its shown in Russia geography map. 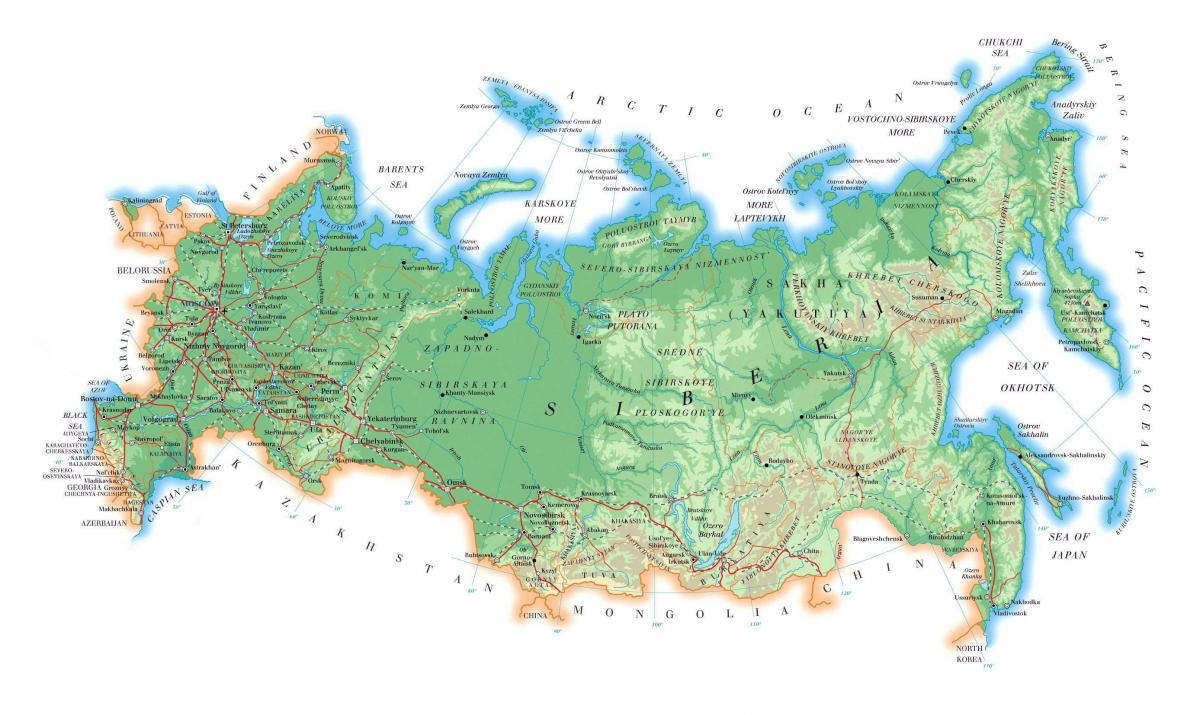 Russia, a country extending over much of northern Eurasia. Comprising much of eastern Europe and northern Asia, it is the world largest country in total physical area. Due to its size, Russia displays both monotony and diversity as its mentioned in Russia physical map. As with its topography, its climates, vegetation, and soils span vast distances. From north to south the East European Plain is clad sequentially in tundra, coniferous forest (taiga), mixed and broad-leaf forests, grassland (steppe), and semi-desert (fringing the Caspian Sea) as the changes in vegetation reflect the changes in climate. Siberia supports a similar sequence but is taiga.

Geographers traditionally divide the vast territory of Russia into five natural zones: the tundra zone; the taiga, or forest, zone; the steppe, or plains, zone; the arid zone; and the mountain zone as you can see in Russia physical map. Most of Russia consists of two plains (the East European Plain and the West Siberian Plain), two lowlands (the North Siberian and the Kolyma, in far northeastern Siberia), two physical plateaus (the Central Siberian Plateau and the Lena Plateau to its east), and a series of mountainous areas mainly concentrated in the extreme northeast or extending intermittently along the southern border.

The East European Plain encompasses most of European Russia. The West Siberian Plain, which is the world largest, extends east from the Urals to the Yenisei River. Because the physical terrain and vegetation are relatively uniform in each of the natural zones, Russia presents an illusion of uniformity. Nevertheless, Russian territory contains all the major vegetation zones of the world except a tropical rain forest as its shown in Russia physical map. 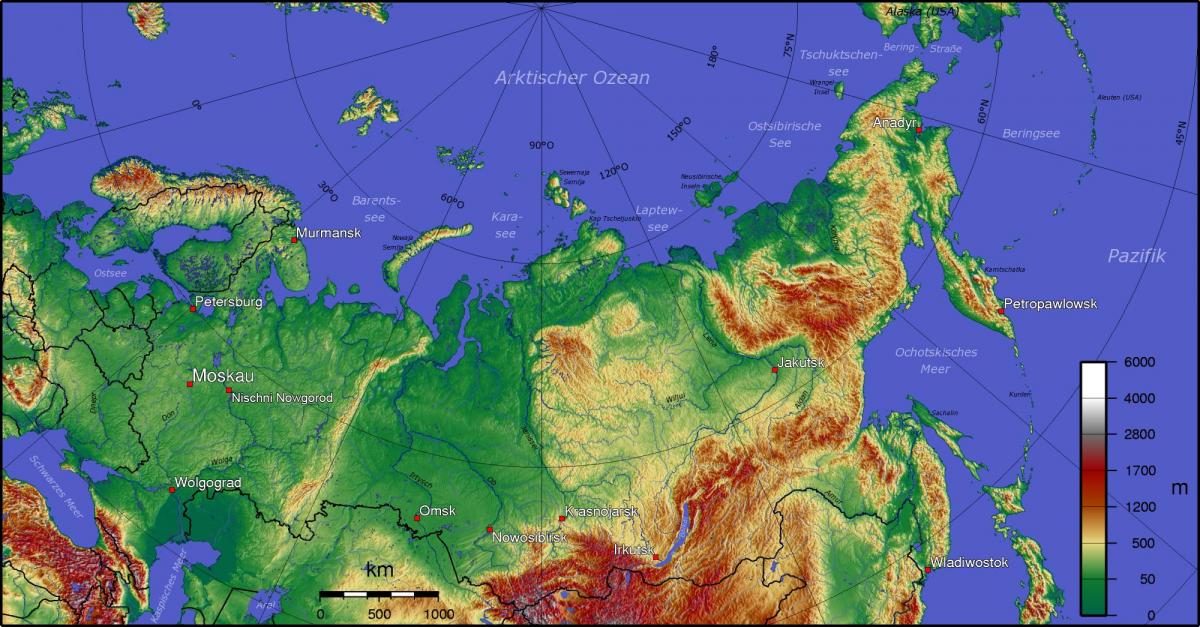 Russia mountain ranges are located principally along its continental divide (the Ural Mountains), along the southwestern border (the Caucasus), along the border with Mongolia (the eastern and western Sayan Mountains and the western extremity of the Altay Mountains), and in eastern Siberia (a complex system of ranges in the northeastern corner of the country and forming the spine of the Kamchatka Peninsula, and lesser mountains extending along the Sea of Okhotsk and the Sea of Japan). Russia has nine major mountain ranges as its mentioned in Russia topographic map.

In general, the eastern half of the country is much more mountainous than the western half, the interior of which is dominated by low plains. The traditional dividing line between the east and the west is the Yenisei River valley as you can see in Russia topographic map. In delineating the western edge of the Central Siberian Plateau from the West Siberian Plain, the Yenisey runs from near the Mongolian border northward into the Arctic Ocean west of the Taymyr Peninsula.

The Russian Arctic stretches for close to 7,000 km west to east, from Karelia and the Kola Peninsula to Nenetsia, the Gulf of Ob, the Taymyr Peninsula and the Chukchi Peninsula (Kolyma, Anadyr River, Cape Dezhnev) as its shown in Russia topographic map. Russian islands and archipelagos in the Arctic Sea include Novaya Zemlya, Severnaya Zemlya, and the New Siberian Islands. 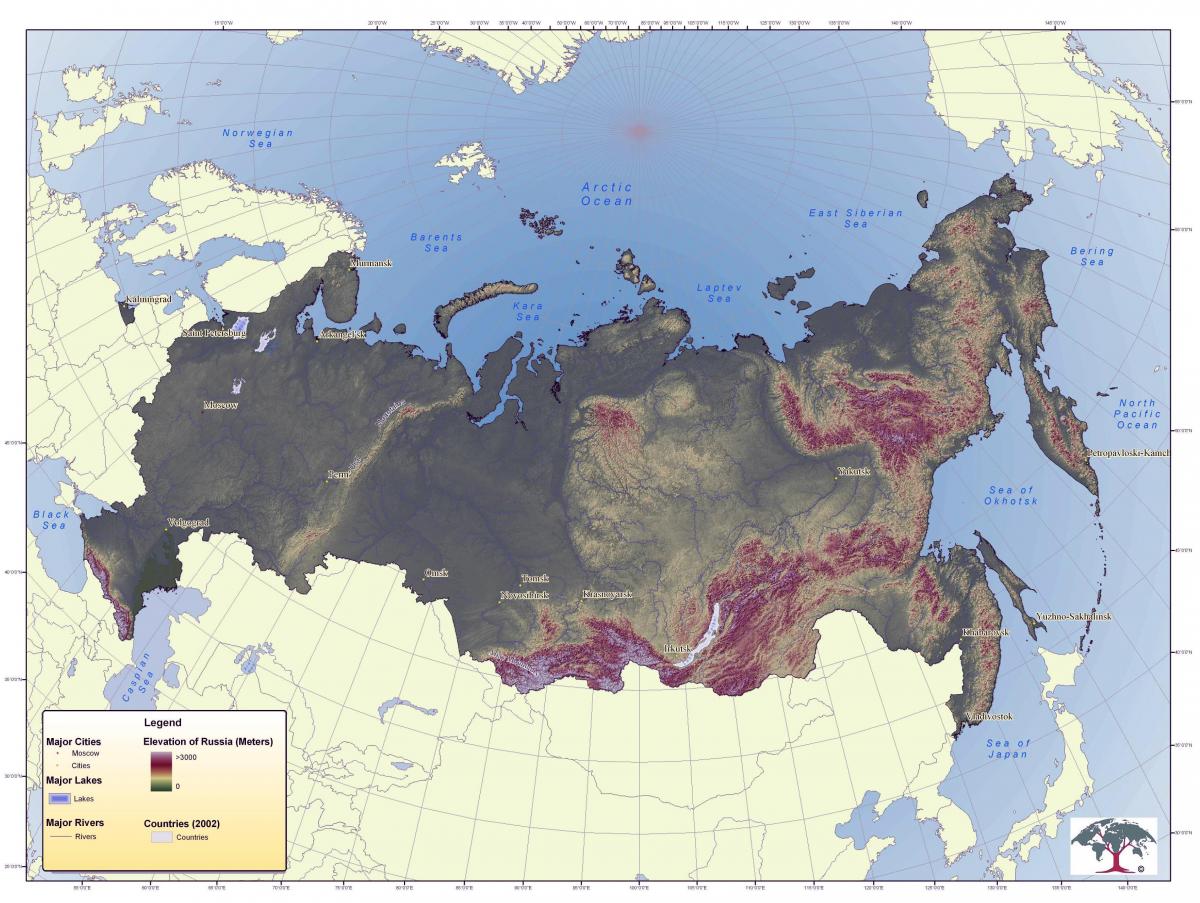 The two widest separated points in Russia are about 8,000 km (4,971 mi) apart along a geodesic line as its mentioned in Russia elevation map. These points are: the boundary with Poland on a 60 km (37 mi) long Vistula Spit separating the Gdańsk Bay from the Vistula Lagoon; and the farthest southeast of the Kuril Islands. The points which are furthest separated in longitude are 6,600 km (4,101 mi) apart along a geodesic line. These elevation points are: in the west, the same spit; in the east, the Big Diomede Island. 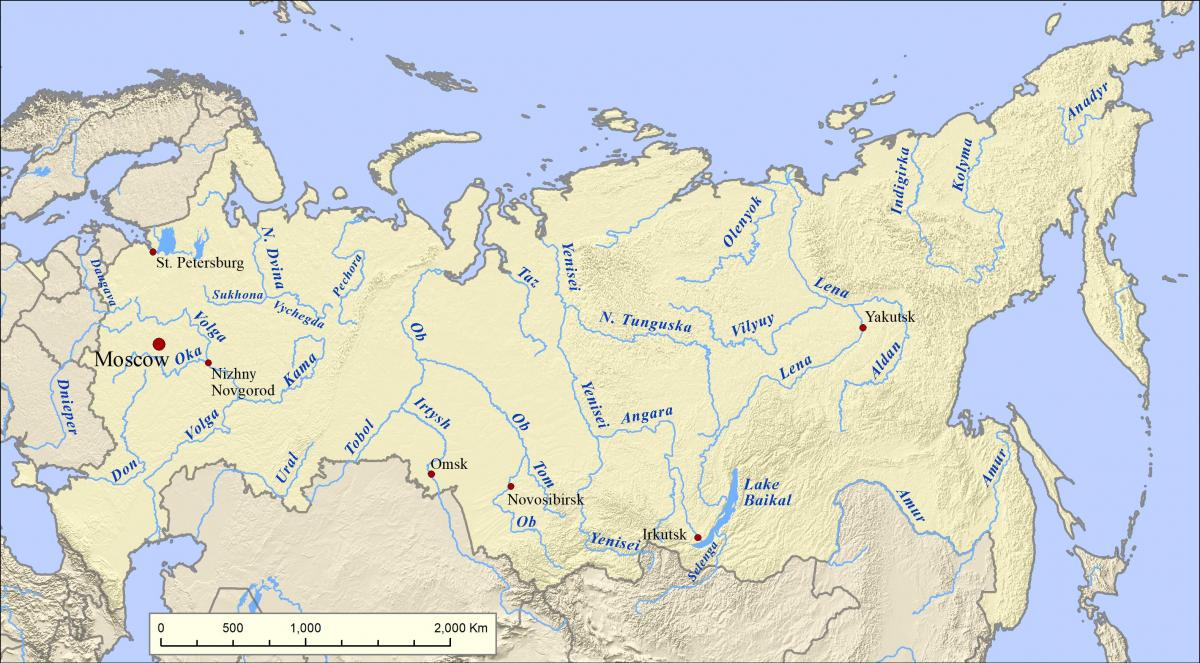 The rivers in Russia map shows the principal rivers with their names of Russia. The rivers map of Russia will allow you to find the main rivers which flow in and through Russia in Europe. The Russia rivers map is downloadable in PDF, printable and free.

Russia is a water-rich country. The earliest settlements in the country sprang up along the rivers, where most of the urban population continues to live. The Volga, Europe longest river, is by far Russia most important commercial waterway as its shown in Russia rivers map. Four of the country thirteen largest cities are located on its banks: Nizhny Novgorod, Samara, Kazan, and Volgograd. The Kama River, which flows west from the southern Urals to join the Volga in the Republic of Tatarstan, is a second key European water system whose banks are densely populated.

Russia has thousands of rivers and inland bodies of water, providing it with one of the world largest surface-water resources. However, most of Russia rivers and streams belong to the Arctic drainage basin, which lies mainly in Siberia but also includes part of European Russia. Altogether, 84% of Russia surface water is located east of the Urals in rivers flowing through sparsely populated territory and into the Arctic and Pacific oceans as its mentioned in Russia rivers map. In contrast, areas with the highest concentrations of population, and therefore the highest demand for water supplies, tend to have the warmest climates and highest rates of evaporation.

Forty of Russia rivers longer than 1,000 kilometers are east of the Urals, including the three major rivers that drain Siberia as they flow northward to the Arctic Ocean: the Irtysh-Ob system (totaling 5,380 kilometers), the Yenisei (4,000 kilometers), and the Lena (3,630 kilometers) as you can see in Russia rivers map. The basins of those river systems cover about eight million square kilometers, discharging nearly 50,000 cubic meters of water per second into the Arctic Ocean. The northward flow of these rivers means that source areas thaw before the areas downstream, creating vast swamps such as the 48,000-square-kilometer Vasyugan Swamp in the center of the West Siberian Plain. The same is true of other river systems, including the Pechora and the Northern Dvina in Europe and the Kolyma and the Indigirka in Siberia. Approximately 10% of Russian territory is classified as swampland. 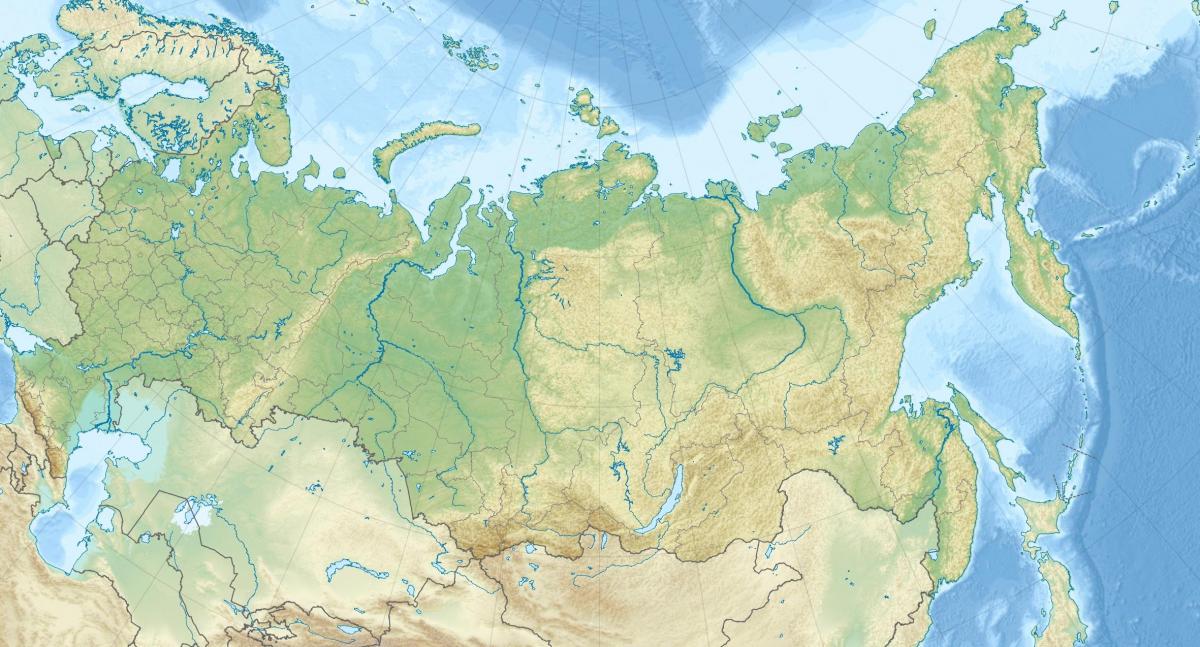 The Ural Mountains form the natural boundary between Europe and Asia; the range extends about 2,100 kilometers from the Arctic Ocean to the northern border of Kazakhstan. Several low passes provide major transportation routes through the Urals eastward from Europe as its mentioned in Russia mountains map. The highest peak, Mount Narodnaya, is 1,894 meters. The Urals also contain valuable deposits of minerals. To the east of the Urals is the West Siberian Plain, which covers more than 80.00 kilometers, stretching about 6,000 kilometers from west to east and about 670 kilometers from north to south. With more than half its territory below 200 meters in elevation, the plain contains some of the world's largest swamps and floodplains. Most of the plain population lives in the drier section south of 77 north latitude.

The region directly east of the West Siberian Plain is the Central Siberian Plateau, which extends eastward from the Yenisei River valley to the Lena River valley. The region is divided into several plateaus, with elevations ranging between 320 and 740 meters; the highest elevation is about 1,800 meters, in the northern Putoran Mountains. In the mountain system west of Lake Baikal in south-central Siberia, the highest elevations are 3,300 meters in the Western Sayan, 3,200 meters in the Eastern Sayan, and 4,500 meters at Belukha Mountain in the Altay Mountains as you can see in Russia mountains map. The Eastern Sayan reach nearly to the southern shore of Lake Baikal; at the lake, there is an elevation difference of more than 4,500 meters between the nearest mountain, 2,840 meters high, and the deepest part of the lake, which is 1,700 meters below sea level.

Truly alpine terrain appears in the southern mountain ranges. Between the Black and Caspian seas, the Caucasus Mountains rise to impressive heights, forming a boundary between Europe and Asia. One of the peaks, Mount Elbrus, is the highest point in Europe, at 5,642 meters. Northeastern Siberia, north of the Stanovoy Range, is an extremely mountainous region as its shown in Russia mountains map. The long Kamchatka Peninsula, which juts southward into the Sea of Okhotsk, includes many volcanic peaks, some of which still are active. The highest is the 4,750-meter Klyuchevskaya Sopka, the highest point in the Russian Far East. 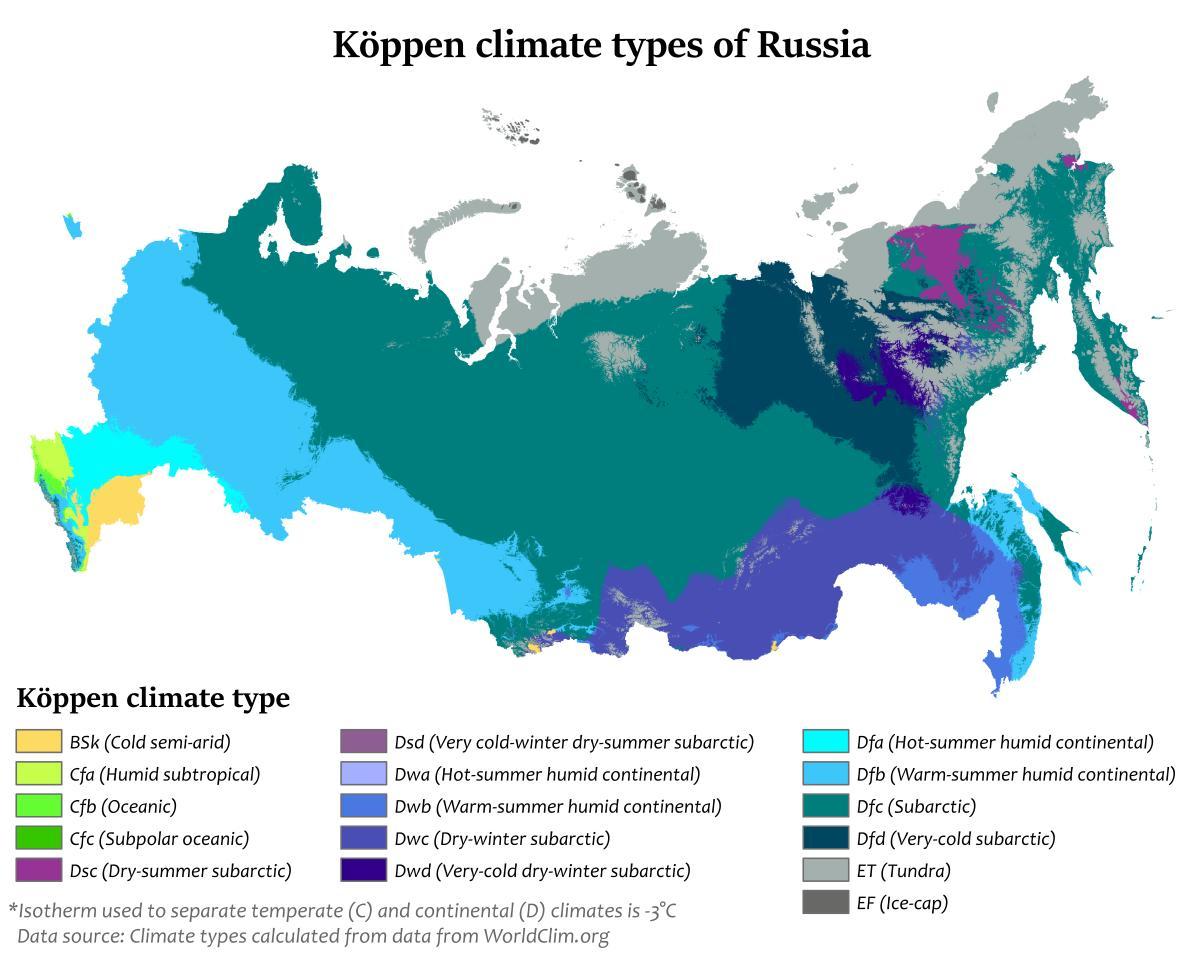 Russia has a largely continental climate because of its sheer size and compact configuration. Most of its land is more than 400 kilometers (249 mi) from the sea, and the center is 3,840 kilometers (2,386 mi) from the sea as its shown in Russia climate map. In addition, Russia mountain ranges, predominantly to the south and the east, block moderating temperatures from the Indian and Pacific Oceans, but European Russian and northern Siberia lack such topographic protection from the Arctic and North Atlantic Oceans.

Most of Russia has only two seasons, summer and winter, with very short intervals of moderation between them. Transportation routes, including entire railroad lines, are redirected in winter to traverse rock-solid waterways and lakes. Some areas constitute important exceptions to this description, however: the moderate maritime climate of Kaliningrad Oblast on the Baltic Sea is similar to that of the American Northwest; the Russian Far East, under the influence of the Pacific Ocean, has a monsoonal climate that reverses the direction of wind in summer and winter, sharply differentiating temperatures; and a narrow, subtropical band of territory provides Russia's most popular summer resort area on the Black Sea as its mentioned in Russia climate map.

In winter, an intense high-pressure system causes winds to blow from the south and the southwest in all but the Pacific region of the Russian landmass; in summer, a low-pressure system brings winds from the north and the northwest to most of the landmass. Russia is the coldest country of the world (average annual temperature is −5.5 °C (22.1 °F)) as you can see in Russia climate map. That meteorological combination reduces the wintertime temperature difference between north and south. Thus, average January temperatures are −6 °C (21 °F) in Saint Petersburg, −27 °C (−17 °F) in the West Siberian Plain, and −43 °C (−45 °F) at Yakutsk (in east-central Siberia, at approximately the same latitude as Saint Petersburg), while the winter average on the Mongolian border, whose latitude is some 10° farther south, is barely warmer.